According to Newton’s law of universal gravitation, every body attracts every other body
by a force pointing along the line intersecting both centers.
The force is proportional to the product of the two masses and inversely proportional to
the square of the distance between them:

By Newton’s Second Law, the acceleration is expressed by $F = m a$.

Combing the two laws, we can easily deduce an direct-sum algorithm to calculate the accelerations
of these bodies, which would be $O(n^2)$. However, the brute-force simulation
has low data dependency and is easy to be reformed to a parallelized algorithm.

Barnes-Hut simulation decreases the time complexity to $O(n \log n)$
which exploting a quad-tree (in the 2-dimensional case) and
approximate a distant cluster of bodies to a point. Each node in the
quad-tree represents a subspace. The root node represents the whole
space and its four children represent the four quadrants of the space.
The resultant force attracted by a distant cluster of bodies is treated as
being attracted by the center of mass.

To determine if the cluster is sufficiently far away, I compute the
quotient $s/d$, where $s$ is the size of the subspace and $d$ the
distance between the body and the center of mass. If $s/d < \theta$,
the cluster is considered distant.

Other approaches including using a sweep line algorithm to reduce the
problem to the 1-dimensional case (overlapping interval search
problem).

The implementation is in the file =src/BSPTree.cc=.

The construction process is rather simple and straightforward.
I start with the whole scene and a list of bounding boxes, recursively
divide the scene into two until the number of bodies in the subspace
is less than a threshold (=NODE_SIZE_THRESHOLD=) or there is no
balanced partition scheme. Each separating line is parallel to X, Y or Z axis.

For a range query, we examine whether the cube in question intersects
with the left-subspace. If so, recursively do a query in the
left-subspace. The same process also applies to the right-subspace.

The implementation is in the file =src/IntervalTree.cc=.

Well, in this project I also use a much easier but also efficient
approach combining a sweep line algorithm and an interval tree besides
a BSP tree implementation.

The query can be fulfilled by an interval tree. Construct an
interval tree with all intervals but do not really store these
intervals. This makes the constructed tree balanced.

The most accurate approach is to deduce the nearest collision event,
simulate the event, and then find another. However, this is incapable
of handling hundreds of bodies, especially when there are some
high-speed and light bodies. They will frequently change directions
and affect other bodies.

A comparatively coarse one is to calculate $n(n-1)/2$ pair-wise collision events
and simulate them one after another. It is coarse in the sense that it may not
handle multiple collisions taking place on one single body correctly.

The two mentioned ways are neither efficient nor parallelizable. One simple mend
making the latter parallelizable is to update velocities after all collision events are
processed, but incurs the inaccuracy that the updated velocity of the other body in a collision won’t
be reflected immediately.

I used a non-parallelizable, asymptotically optimal sequential approach that is a bit accurate then the above one.

By the way, to make the calculation of the collision point more accurate, I’ll use a techinique stated below:

Suppose $\vec{p_0}, \vec{p_0}$ are positions of the two bodies and $\vec{\Delta p}, \vec{\Delta q}$
their translational vectors. Then we can parametrize their positions:

We will try to solve the equation $|\vec{p}(t)-\vec{q}(t)|=R+r$ where $R,r$ are radii of the two bodies.
This is a quadratic equation and we should care whether the smaller root $t_0$ satisfies $0 \le t_0 \le 1$ or the two bodies overlap.
If so, teleports the two bodies to their collision moment which is $now + t_0 \Delta t$ and carry out an elastic collision. 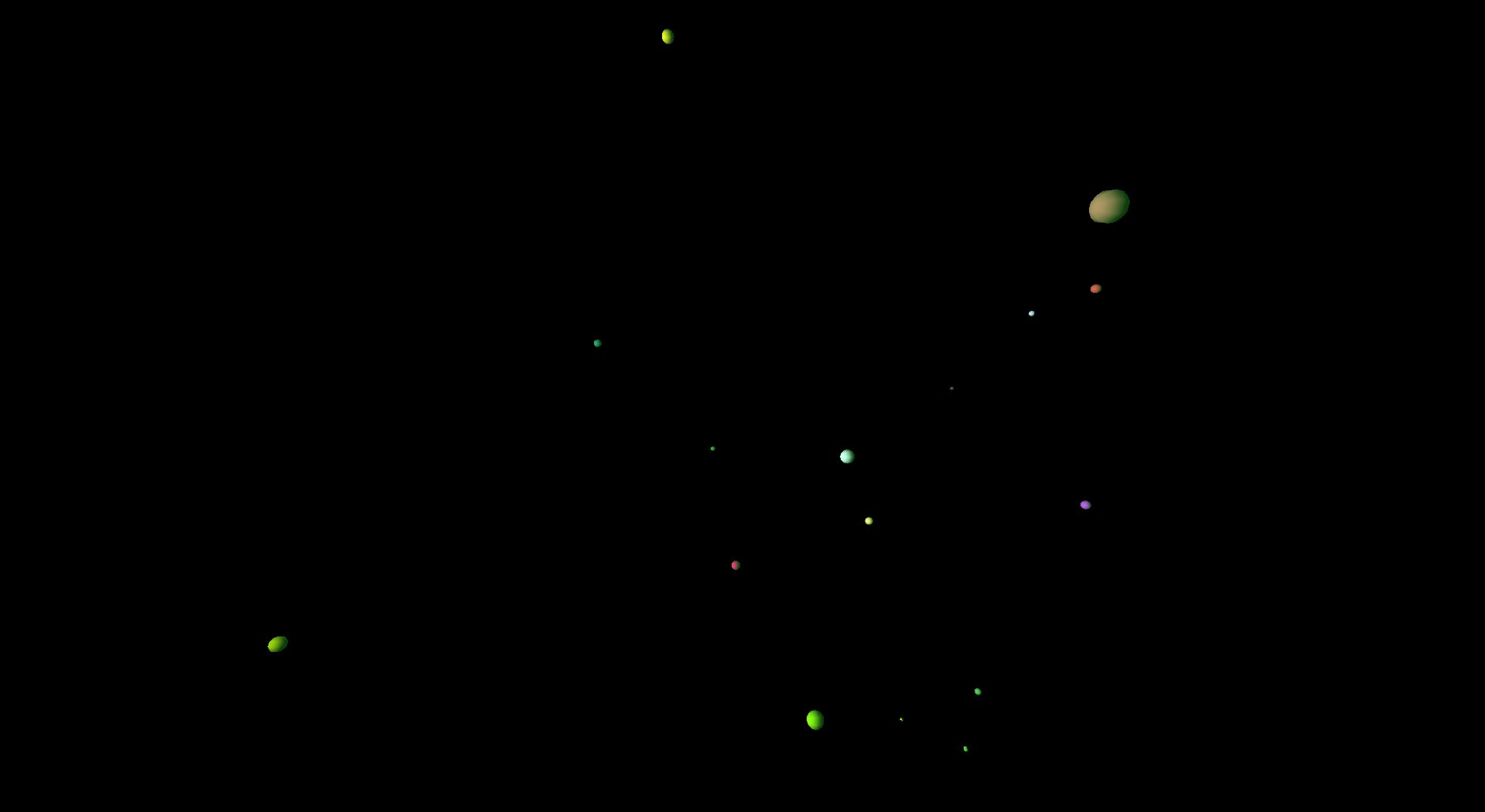